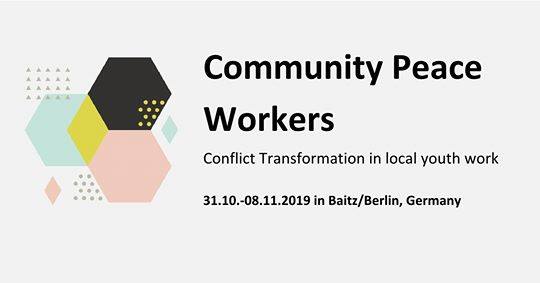 Vom 31.10 bis 08.11.2019 nimmt Art Mine an dem ERASMUS+ Trainingskurs „Community Peace Workers“ zum Thema Konflikttransformation in der Jugendarbeit teil. Hier eine kurze Beschreibung des Kursinhalts:
A training on tools and methods, which can be used to get young people active in conflict transformation on a local level. We will go from basic terminologies over conflict analysis to peace project design with lots of practice on your real-life cases.

In a time, where the political scene of many European Countries is characterized by an increasing polarization, the capacity to deal with conflicts in a reflected and constructive manner are of crucial importance for the future of democratic societies. Socio-political conflicts, which are at the core of many debates, often find their manifestations also on the local level, may it be the argument about a new refugee facility in the neighbourhood or tensions between different ethnic groups living in the same area.  It is also in this environment, where young people can make their first steps of getting involved in conflict transformation efforts.

Equipped with the necessary competences, youth houses and other youth institutions can become a place to incubate new ideas and accompany the young people in developing and implementing peace initiatives. Since the inception of Peace and Conflict Studies as an academic discipline in the 1960s a large amount of knowledge and models have been developed with a focus on their practical applicability in various conflict settings. Transmitting the most relevant of them to youth workers on the ground to improve the conflict transformation competences of their target groups is the declared aim of this proposed training course.